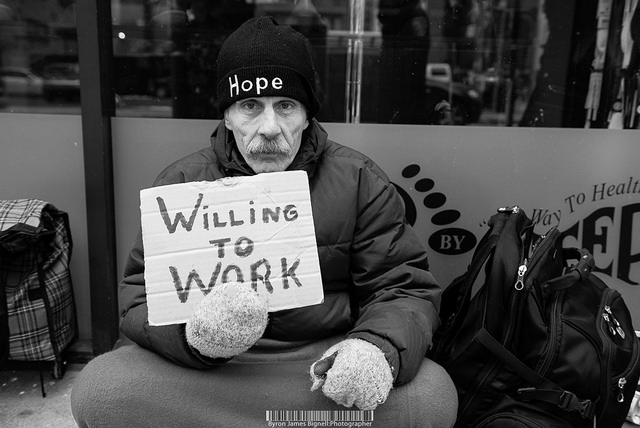 Last week, Wal-Mart announced that by 2016, all of their employees in the United States will be earning a minimum of $10 per hour – up from their current minimum wage of $9 per hour. While this is more than the federally mandated minimum wage, it’s really not enough for someone to live on. In fact, a significant proportion of Wal-Mart employees are forced to supplement their earnings with some form of government assistance. At the same time, the Wal-Mart CEO reportedly has annual earnings exceeding $25 million.

This story generated a lively and utterly depressing discussion on Facebook about the merits of government assistance programs and the people who make use of them. There is an assumption held by many that poor people are poor through their own fault. They are lazy, they are irresponsible, they spend beyond their means and have children they cannot afford to have.

These kinds of judgments make me snarky. The people making them seem to have a complete lack of compassion, and they are almost fearful about the idea of some of their hard-earned tax dollars being used to help the less fortunate.

I thank my lucky stars that I have never been homeless, but I have experienced extreme financial hardship. When my younger son was a baby, I used to dig around in the couch cushions and in coat pockets in search of enough change to buy diapers. At times, I genuinely wondered where my next meal was coming from, and I started screening calls from debt collection companies.

I didn’t have it as bad as many people do – like I said, I always had a roof over my head and clothes on my back – but my experiences did make me sensitive to the assumptions and criticisms that many people have of poor people.

Some of the misconceptions that really need to go include the following:

– Poor people are poor by choice. People do not choose to be poor just so they can freeload off the government. Various research studies have shown that over 90% of government assistance claims are based on genuine need. There are exceptions, of course, but the vast majority of poor people really do want to improve their lives. They just face an uphill battle doing so.

– People become or stay poor by making bad decisions. Sometimes, bad stuff happens. People lose their jobs. Their houses burn down or their children are diagnosed with expensive conditions that require constant care. Mortgage crises happen and force people out of their homes. Or the spouse who is the primary breadwinner leaves and defaults on support payments, leaving the remaining spouse to work two or three minimum wage jobs just to keep the family fed. Sometimes people are simply born into poverty. Generational cycles like this are extremely hard to break, and it’s not for lack of trying.

– If people can afford to have a Smart phone and an email address, they don’t need government assistance. I keep seeing this message pop up on my Facebook feed, and it drives me crazy. Have you ever tried to look for a job without a phone and an e-mail address? You cannot complain about poor people not having jobs, and then begrudge them the tools they need in order to try and find jobs.

The message in all of this is that people shouldn’t judge the circumstances of others without knowing their journeys. We need to try to understand that life is unpredictable. The things that happen to other people could so easily happen to any one of us.

Be kind. Be compassionate. Understand that behind every poor person is a story that would twist your heart.

'In Defense Of Poor People' has no comments